Until now, the socialists or its far-left allies have declined to reveal any details of their agreement. The socialists say it will only be known once the nominated government is overthrown (sometime in the next few weeks). Rumour has it that no comprehensive deal has been achieved (one that guarantees a stable four years government) and only one-off deals have been agreed.

Yesterday, it was rumoured that the socialists wil propose a “golden rule” according to which no wages or pensions cuts and income tax hikes will be made in the next four years. They expect that any eventual  budget deficit overshooting will be met with (an upwards) target revision.

It sure sounds like a solid basis for a successful partnership in the euro area.

I grant you. I also find it hard to believe but it’s the plain truth. The portuguese offical media watchdog ERC has asked HotTV, a portuguese adult premium channel to “broadcast more programs in portuguese and more european and independent contents“. No subject escapes the grip of portuguese regulators. So it seems.

Until last week local media didn’t even knew who Chuka Umunna was. Least what he standed for. But his name sounded really cool. So it was decided he would be the new hero left to save us all from the clutches of neoliberalism and austerity.

Alas. They didn’t even got the chance to learn how to spell his name. We’ll have to wait for a new messiah.

The public portuguese airline company, TAP, has a colossal debt (>1000 million euros) and is desperately in need of cash. It is also in the middle of a privatization process that so far hasn’t attracted many bidders. Of course, it’s no help that whoever buys TAP will be bonded by public service requirements.

To add insult to injury, this month the pilots union called a 10 day strike that dealt another blow to the credibility of a cash strapped company. Although the strike wasn’t a success, the union proudly claims it afflicted a 30 million loss in the company. And promised more strikes in the near future.

Also, in a recent interview to Diario de Notícias, the socialist party leader hinted that a future government by his party would nationalize 51% of TAP. He warned potential bidders not to dare buying more than 49% of the company.

Of course, this will further dim the prospects of a successful privatization and the recovery of TAP. Unfortunately, the most likely future for TAP is liquidation.

Perhaps frustrated by the suprising victory two days ago, anti-austerity campaigners descended on Westminster to protest against austerity and the new Conservative government. Lacking better ways to express emotions, they injured a police officer and defaced a WWII memorial (below) 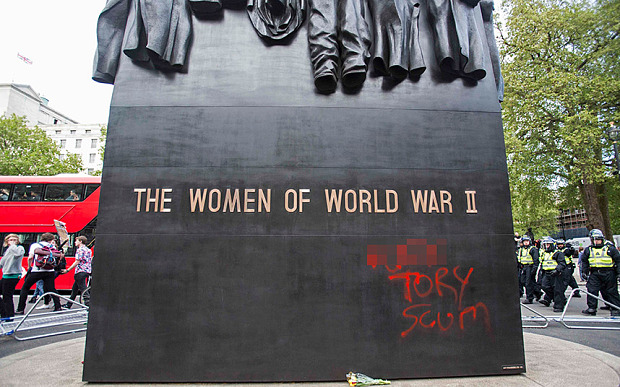 Besides showing a little more respect for Democracy, police officers and WWII, they should have listened to the socialist leader and PM hopeful Antonio Costa who yesterday congratulated David Cameron and the Conservatives for their victory. He told reporters that unlike Portugal, where harsh austerity was imposed after the former socialist government left the country on the brink of bankruptcy, there was no austerity in Great Britain.  That was the main driver of the tory electoral success, he claims.